In 1845, Lange was founded by Ferdinand Adolph Lange in Glashütte, Germany, producing high-quality pocket watches. Pocket watches were the best products of the company, and they were given the designation of “1A”. The Lange family was responsible for the company for many generations, and like many German watchmakers, it was producing over-sized wristwatches in world war II for German airmen. In 1948, it was nationalized by the postwar Soviet administration, and then, watches’ production ceased.

However, after the German reunification, in 1990, Walter Lange, the founder’s great-grandson, with Günter Blümlein, the watch industry executive, relaunched the company assisted by many Swiss watch manufacturers, including Jaeger-LeCoultre and IWC, presenting its first wristwatch collection in 1994. Nowadays, A. Lange & Söhne’s is a member of “Richemont SA”, creating one of the most prestigious, high-quality wristwatches worldwide.

Lange watches are considered an icon of prestige. They are famous for their distinctive appearance, made entirely by Lange itself. They are mechanical rather than quartz except for very few watch versions. Their cases are made of gold, yellow, rose, or white, and platinum. Their design and decoration are Glashütte (glassworks) in appearance, avoiding typical Swiss features, such as multiple bridges and cocks, or “Glashütte stripes”,  pearlage, screwed gold chatons, and hand-engraved balance cocks.

Also, a special metal, known as German silver, is what Lange movements are made from, not from the plated brass as the Swiss ones. Lange watches are considered more austere than the Swiss watches. Besides time-only watches, Lange is also famous for its complications, such as perpetual calendars, chronographs, and split-seconds chronographs.

Among celebrities wearing A. Lange & Söhne, Leslie Moonves, the CBS president, and CEO, was spotted wearing a Lange 1 of white gold and grey dial, which is no longer in production. Brad Pitt also owns plenty of Lange & Söhn. And it’s also considered one of the favorite brands of Vladimir Putin.

Most popular A. Lange & Söhne models and collections

As A. Lange & Söhne tried to put Germany back on the map of the luxury watchmaking, it created their high-end models. Among these models, an iconic model was and is still shining, which is Lange 1, being its first watch collection after its relaunching in 1994. 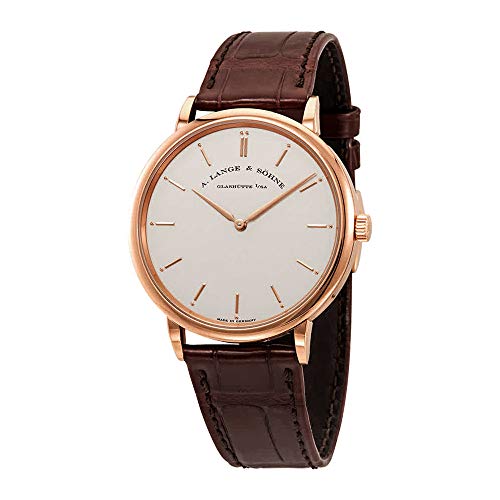 In 2012, Lange unveiled a take on the classic Lange 1, launching the Lange 1 Tourbillon Perpetual Calendar, with a new type of instantaneously jumping month ring and two large complications.

Another remarkable watch model of A. Lange & Söhne is Richard Lange Perpetual Calendar Terreluna, launched in 2014. It’s not only a Perpetual Calendar watch, but also it has the most complicated and unconventional moon-phase displays ever made, on its back, a disk of the Northern Hemisphere map surrounded by a fantasy sky with a third disk showing the phases of the moon. The moon precisely orbits the earth once every 29 days, 12 hours, 44 minutes and 3 seconds. Time anywhere in the world can be seen by referring to the 24-hour markers on the ring that surrounds the display. The moon display is very accurate, it could be 1,058 years before it may need to be corrected by one day. On the front is a regulator-style with minutes in the large circle and two smaller circles of hours and seconds, as well as a power reserve indicator of 14 days at 6 o’clock.

People who choose A. Lange & Söhne also consider these brands

[wpsm_toplist] Chopard history In 1860, Chopard was founded by Louis-Ulysse Chopard in